The word “Yakult” is well known to the people in Singapore as even small kids know what it is. “Yakult” is simplified from the word “Jahurto” which means yogurt in Esperanto (created by Dutch named Zammenhaf in 1887). However, majority of the people only know that Yakult helps digestion. But do you know that Yakult actually does more than aid digestion?
Yakult Background
Yakult was founded in1935 in Japan by Dr Minoru Shirota (1899~1982). In 1955, Dr Shirota established Yakult Honsha Co Ltd in Tokyo, which is today the hub of Yakult’s worldwide operations. Yakult is presently sold in 32 countries and territories around the world and consumed by more than 30 million people every day.
Today, Yakult has its own institutes with 350 scientists and medical doctors (All graduated from recognised university). Yakult business contains different sectors:
1) Food & Beverages (Main Business)
2) Medicines (Pharmaceuticals)
3) Cosmetic Products

Yakult Factory Background (Singapore)
Yakult was first introduced to Singaporeans in 1979 with the incorporation of Yakult Singapore in 1978.
Although Yakult Singapore started humbly in three containers at Hill view Avenue, it operates today from a multi-million dollar ultra-modern plant at Senoko Avenue.
As Yakult is produced locally, our customers can be assured of the highest quality and freshness of Yakult sold in Singapore.
Yakult Singapore perseveres to continue its healthy journey to spread to all Singaporeans alike the awareness on the benefits of its unique probiotics, L.casei Strain Shirota along the principles of Shirota-ism.
Yakult Singapore produces more than 200,000 bottles of Yakult a day in order to satisfy the demand of Singapore. It also produces enough to export into Brunei. 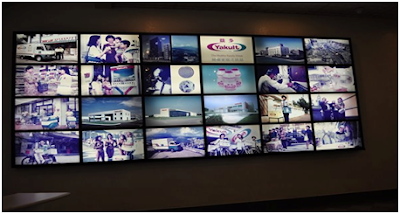 What have we learnt?

What is Yakult made of?
Yakult is made from milk, glucose and bacteria. Yakult Factory Singapore only uses the best ingredient. Milk was bought from Australia and Glucose was bought from Italy and bacteria were from Japan (Tokyo). A bottle of Yakult contains more than 10millions good bacteria that makes our immune system stronger.
However, the process of making Yakult is not easy. Ingredients such as bacteria are to be put in the container and breed for 7 days. All the bacterial are put into server training and only the stronger bacterial are able to survive.
Benefits of Yakult
Yakult contains more than 10 billion probiotics, L.casei Strain Shirota which

1) Increase the number of good bacteria in the intestine
2) Helps suppress the growth of bad bacteria
3) Lower the PH value (Making Intestine sour which helps relieve constipation)
4) Helps to maintain a healthy digestive system
Benefits of Probiotics
Yakult contains probiotics, which also known as microorganisms.
One of the benefits of probiotics is that the bacteria strengthen the immune system. Because of this support to the immune system, they have been used in alleviating allergies, chronic fatigue syndrome and systemic Candida.
Questions Raised
After the presentation, many questions are raised by the students. The questions are asked as shown below:
1) Price & Size differences? (Indonesia, Japan, Singapore etc.)
-       In different countries, the prices and sizes of the Yakult is different as requirement for each countries is different. Example, for Indonesia, the earning income power is low and that is why their price is lower so that it is affordable. Thus in return, the size of the Yakult was also reduced in order to match the price. As for Singapore, we have high earning income power and that is why our Yakult cost more than other nation, however in return, the size of the Yakult also increase in order to value for money.
2) What are the differences between Vitagen and Yakult?
-       Vitagen uses L.acidophilus (Bacteria), whereas Yakult uses Lactobacillus casei strain shirota (Bacteria). But what makes Lactobacillus casei strain shirota special is that when it comes to cold storage (4 degree Celsius), the bacteria will not die whereas L.acidophilus bacteria will die this shows that Yakult uses better and stronger bacteria as compared to Vitagen. 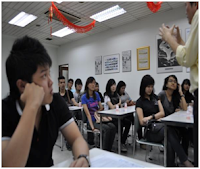 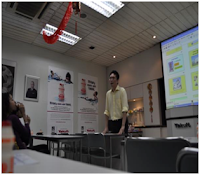 Yakult’s L.casei strain Shirota is an excellent and unique probiotic strain that was biotechnologically strengthened by founder, Dr Minoru Shirota. The uniqueness of this probiotic strain lies in its strength to survive the gastric juice and bile to reach the intestines alive, where it works to maintain the balance between the beneficial and harmful bacteria.
We have also learnt about having good management is important to run a business by being able to make critical decisions.
A bottle of Yakult daily packs a powerful punch to keep bad bacteria at bay and improves your overall digestive system!
What our students says…
Winston
This Yakult trip let me knows what is the different between Vitagen and Yakult. I had learnt about the production of Yakult such as how it is created, how it is produced, and manufactured. It’s a great eye-opening trip for me!
Jian Sheng
This is a good experience for me. I understand the whole process of Yakult from manufacturing to packaging after this trip. I will drink more Yakult because it is good for our digestion system and health.
Vivian
I have always though that Yakult only produces food and beverages. Never have I thought that they sell cosmetics and skincare products too.
Hui Xiang
A very knowledgeable and fruitful experience on how Yakult produces their Yakult and bottles.
Yustina
I’ve a better understanding of the nutrition facts and health behind the bottle. (Probiotics, good bacteria etc.)
It’s good to experience the thorough production process of Yakult. Now I know that the founder and his group really put in a lot of effects in bringing the best quality of Yakult available and affordable to the public.
Yakult takes quality and cleanliness seriously. They minimize contamination in the entire production process.
Edward
From this excursion, I was able to gain insights on how Yakult operates its Singapore manufacturing outlet. In addition, I was able to learn more about Yakult’s probiotics effects on our immune system.
Also, from this trip I was able to learn that Singapore market size is relatively small compared to that of larger nations (Indonesia, Japan). Thus, the factory in Singapore does not operate at full capacity (only one shift from 8am – 5pm). Due to this, Yakult Singapore also has the ability to manufacture different flavors compared to that of other factories abroad. 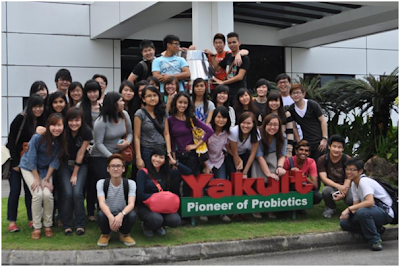 This article is done by See Boon Hong & Ng Song Wen
Diploma in Business Informatics (EMRS)
at 8:57 AM